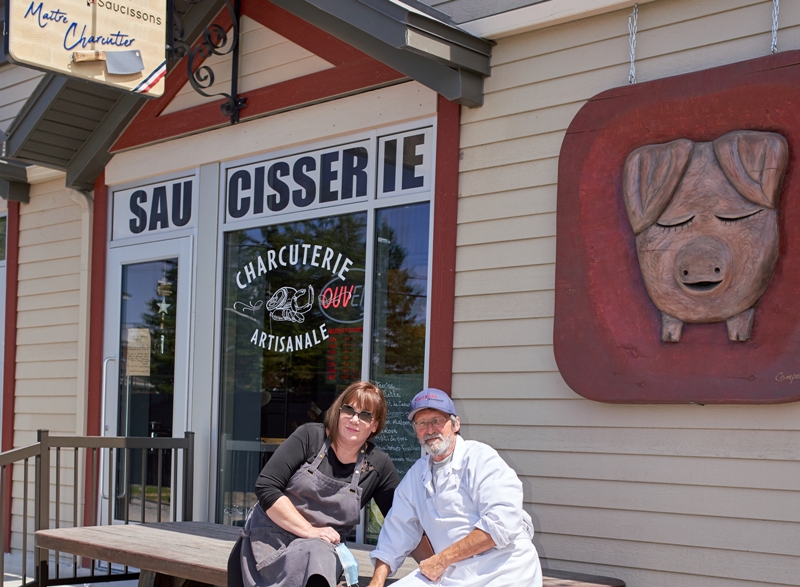 An artisanal delicatessen- and sausagemaker – charcutier – for more than 20 years, Bertrand Bourget, from Percé, recently decided to put down roots here. Now established in the heart of downtown – the former Saint-Jovite – the shop operated by Bertrand and his wife Louise is happy place chock full of the most authentic, delicious examples of this heritagestyle food you can imagine.

Bertrand was trained by artisans and masters of his craft in several regions of France, including the Vosges, Champagne, Normandy, Brittany, Lyon, and Bastia, in Corsica, to learn the secret of making dry sausages. On his return to Québec, he decided to perfect his knowledge with Benoit Tétard of Queue de cochon.

“Benoit is known, and rightly so, as the best charcutier in the province,” says Bertrand. “I wanted to tailor the knowledge I had acquired in France so as to adapt it to Québec tastes.”

At their shop Saucisses & Saucissons, the sausage has, as you might expect, top billing. Bertrand’s sausages are made exclusively of pork shoulder from pigs raised in Québec without growth hormones or antibiotics – except for the merguez sausages which are, of course, made from lamb.

All the flavours offered by our artisanal charcutier come from fresh products such as blueberries, herbs, asparagus, Québec cheeses, maple and more.

As a result, in the rapini and parmesan suasage, for instance, the rapini comes from an area market gardener and the parmesan was bought as flakes from the local grocer.

The same is true of, for example, the Greek olive and feta sausage and the one with onion conserves, for which the onions were carefully deglazed on-site with balsamic vinegar.

The meats have been made, specifically, without the help of ready-to-use seasoning mixes, which are an industry standard. As a result, there’s no need to boil the sausages before putting them on to cook, whether on the barbecue, in the oven or pan-fried.

Sadly, and it’s true for the great majority of activity sectors, quality rarely means profitability. However, the wish to continue the tradition of master charcutiers and to serve only healthy goods is a philosophy to which Bertrand and Louise fully subscribe. “It’s a decision Louise and I made together,” Bertrand explains.

”Our products are not more expensive than those from the big stores, because our sausages don’t melt away when you cook them. Our customers notice it. When somebody comes to buy 20 sausages for a barbecue, we have eight new customers the following day. It’s as simple as that.”

And it doesn’t stop there. While Bertrand looks after the meat side – in which you’ll also find foie gras, conserved gizzards, terrine (something like paté, and made without added flour), pale ham and leg of duck confit made following a recipe learned in Vendée – Louise busies herself making cooked dishes.

Everything is homemade, from the pastry to the garnish. As a result, customers have their hearts set on her chicken pot pie, pizza, spaghetti sauce, quiches, and a great favourite, “pâté mexicain”.

After the keen interest customers showed in traditional Québec Christmas dishes such as ragout de pattes de cochon à l’ancienne, ragout de boulettes and tourtières last December, Bertrand notes that Louise will make any of them again when customers make the request.

Advice from the craftsman

To be able to distinguish among the various flavours and ensure that they are fairly shared among guests, Bertrand suggests you place the sausages in alphabetical order from left to right in the pan or on the grill, e.g., first, bacon cheddar and last, vegetarian. Happy grilling!

Saucisses & Saucissons is located at 418 rue Lacasse in downtown Mont-Tremblant. 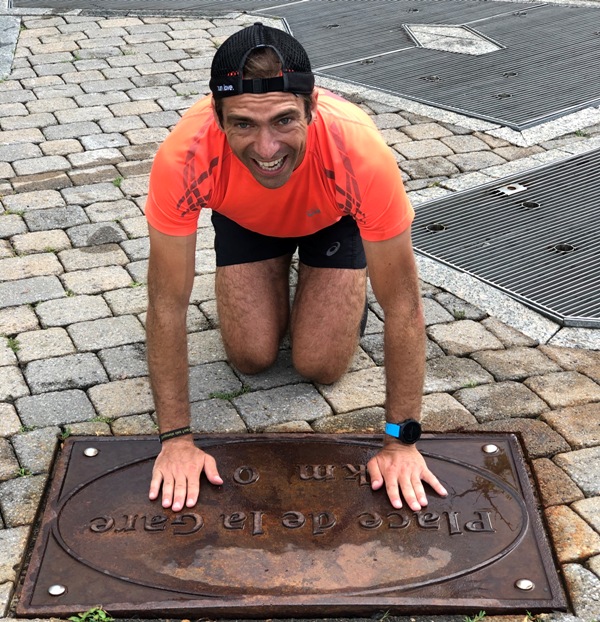 His challenge was the P’tit Train du Nord 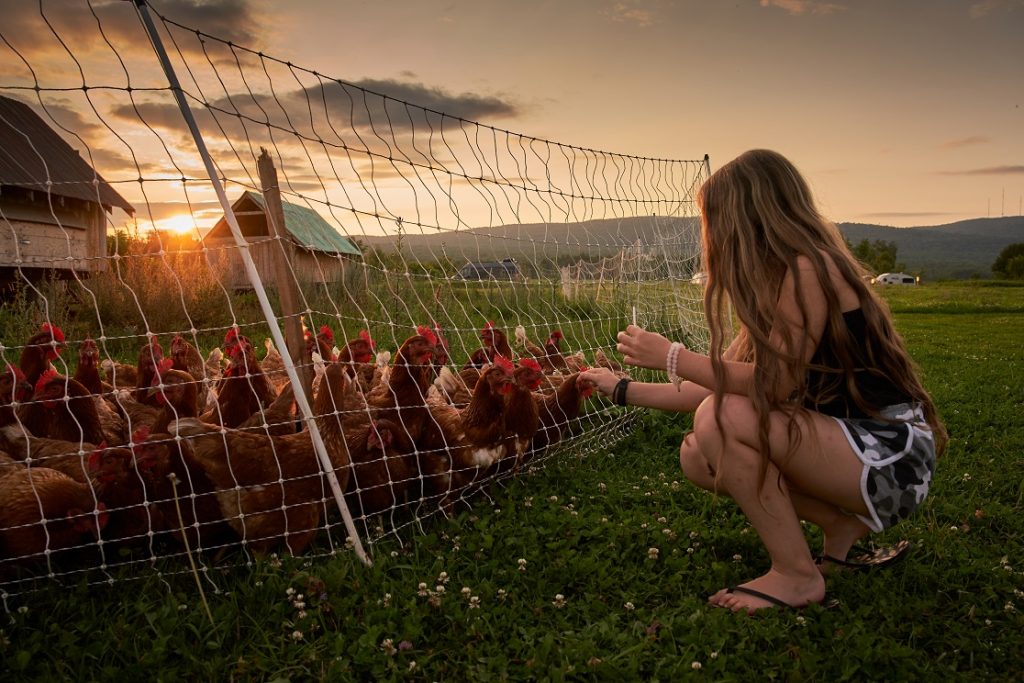 Exploring the land by RV 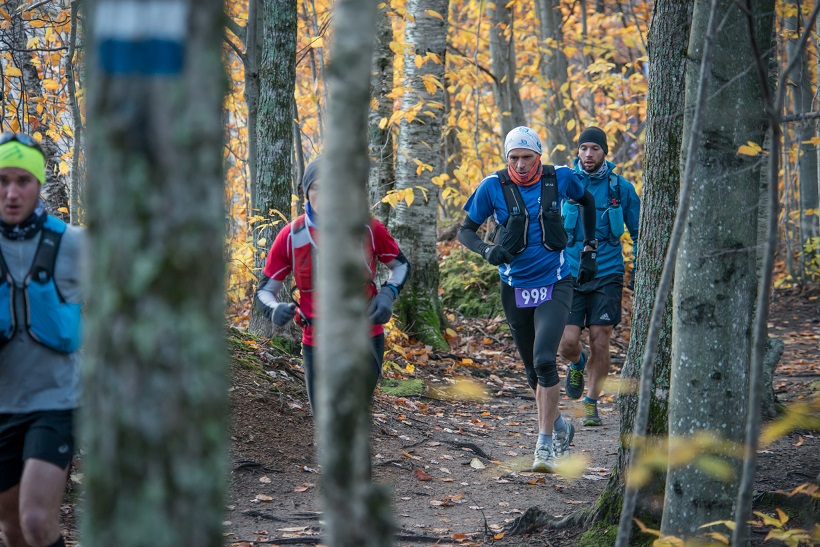 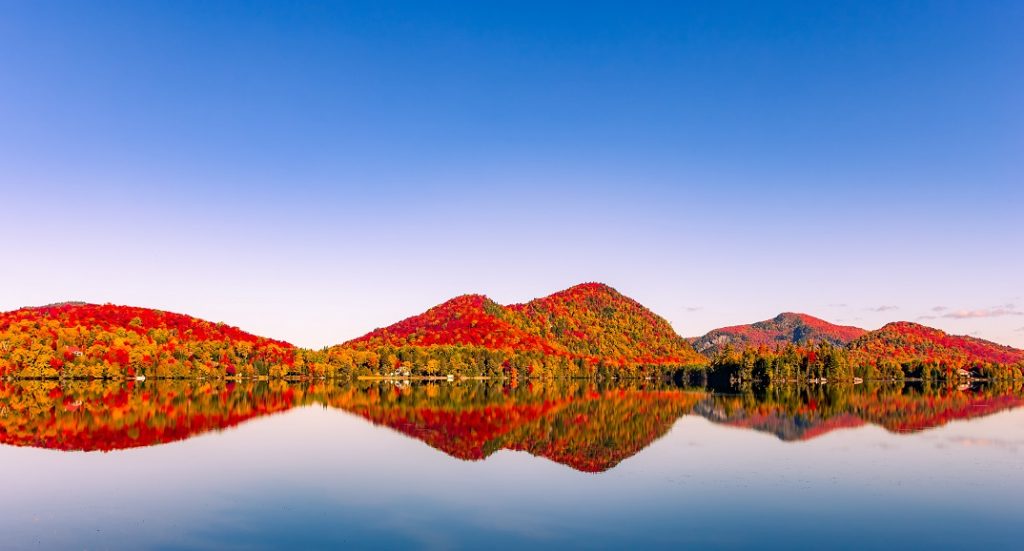 The Mont-Tremblant area in living colour